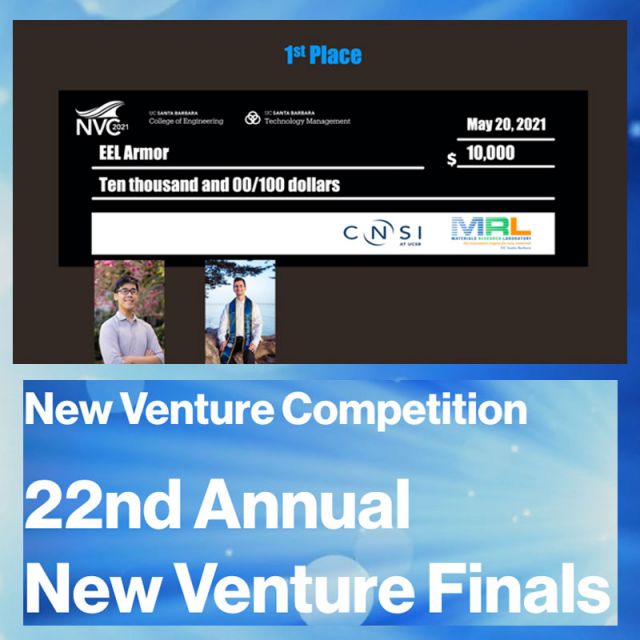 Based on the The UCSB Current article – "Prized Protection”

The 22nd annual competition was viewed remotely by people around the nation.

“Winning NVC is a surreal thing. It’s very humbling given the strong teams and talented entrepreneurs in the competition,” said Nguyen, who will graduate in June with a bachelor’s degree in spatial sciences. “Having worked on this project with great passion over the past eight months, our team is very proud to see that the judges and audience understood the need for our product.”

EEL Armor’s product is designed to provide better protection and greater comfort than current options, such as vests with metal plate inserts, and to be less expensive.

“Over a year ago, I started taking defensive training classes with law enforcement and military officers. They usually came in full equipment, including armor, and I was able to learn firsthand how heavy it was even after one hour of training,” Nguyen explained. “The few people who had lightweight rifle armor plates spent thousands of dollars on armor, and the idea that our nation’s men and women were vulnerable because they lacked the funds for better protection bothered me.”

Nguyen said he started to build his own plates with a major emphasis on reducing weight and cost. The EEL Armor team developed a special ceramic strike plate that shatters a bullet, and a composite backer plate made of polyethylene that lies behind it for an added layer of protection.

“Our armor is lighter and cheaper than the competition, but does not sacrifice in the level of protection it provides,” said Nguyen, noting that their design tested flawlessly and passed federal armor tests when it was shot-tested at a federal facility in Oregon.

According to Nguyen, the next steps for EEL Armor include incorporation, applying for patents and seeking official certification from the National Institute of Justice, which ensures that the armor meets rigorous safety and quality standards. “We are very grateful to the program, our mentors, and all the sponsors for the funding we are being awarded,” said Nguyen. “We plan to have our plates manufactured and available for purchase by this fall, and hope their life-saving effects can have an immediate impact in the field.”

The Scopen team, originally a CE Capstone project, included two CE members, Boning Dong and Trenton Rochelle, received an honorable mention for their design of a portable wireless oscilloscope that provides visual signal measurement to any computer or smartphone in any location. Low-cost measuring tool that can be employed at home and in labs, with future expansion into production/testing facilities, eliminating the need for expensive fixed processing equipment at each location.

In other results, Tesserol finished in second place and received the Best of Fair award to earn a total of $8,500. The team designed ethanol fuel-cell modules to power commercial drones, offering increased operation times and higher payload capacity, while being cheaper and minimizing the environmental impact. Third place and a check for $5,000 went to Ultim, designers of a cloud-based platform to help solve the $18 billion problem of lost luggage in the commercial aviation industry. Solaris, Aquipur and Scopen each received honorable mention and a check for $2,500.

“In addition to having a viable business idea, the teams that make the finals usually have a few key traits in common — they are committed, coachable and competitive. EEL Armor had all of these in addition to being meticulously prepared,” said Adornetto.

Nguyen said that while his team couldn’t validate market research with in-person interviews of law enforcement or meet face-to-face with mentors, they focused on making the most of their available resources.

“We feel a sense of tongue-in-cheek pride to leave a legacy of being NVC’s first and hopefully only ‘fully remote’ winning team, and hope that future competitors see us as an example of not letting adversity and uncertainty keep them from pursuing their ambitions,” said Nguyen.